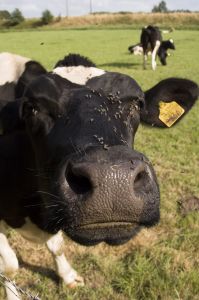 He’s not just famous for cutting up animals and putting them on display, the Guardian says...

Damien Hirst is breathing fresh life into the renewable energy industry by ordering the country’s second largest solar power system. Hirst is to spend up to £1.5m on a 310kw solar power system for his studio buildings in Stroud, Gloucestershire.

Only the Cooperative Insurance Society Tower in Manchester has a bigger system. Hirst’s solar panels will generate enough electricity to power up to 150 homes, and it is not clear whether it will feed into the national grid.

The panels will spread over some 1,800 square metres and will cover all three of Hirst’s warehouses, one of which is his formaldehyde studio, presumably where his famous preserved shark was prepared.