carbon emissions30
Keeping transport-related energy consumption and carbon dioxide emissions from ballooning out of control between now and 2050 will require a mix of improved fuel... 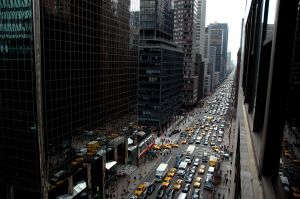 Keeping transport-related energy consumption and carbon dioxide emissions from ballooning out of control between now and 2050 will require a mix of improved fuel efficiency, new technologies and stronger government policies, according to a new report from the International Energy Agency (IEA).

The new report, “Transport, Energy and CO2: Moving Toward Sustainability,” says it’s possible and less expensive than many assume to reduce transport-related carbon emissions far below current levels by 2050, even with the projected rapid growth in car ownership. Doing so would take a shift to more efficient travel modes, an up to 50-per cent improvement in vehicle fuel efficiency and development of electricity, hydrogen and advanced biofuels for transport … and all that would require strong government policies.

Currently, transport accounts for nearly one-fourth of the globe’s energy-related carbon dioxide emissions. That figure is likely to rise even higher with worldwide car ownership set to triple to over two billion by 2050. Trucking activity and air travel are also expected to rise by factors of two and four, respectively.

“The first priority should be to adopt technologies and practices that are cost-effective today,” writes IEA executive director Nobuo Tanaka in the report’s foreword. “This will lead to substantial gains in vehicle fuel economy — we target a 50-per cent improvement by 2030 for new light-duty vehicles.”

Tanaka adds, “We should also move strongly toward better urban development practices and encourage sensible changes in the way we travel, by investing in a new generation of urban and intercity transit systems.”

Such measures, though, will only be enough to slow the growth in vehicle travel and stabilise CO2 emission levels. To cut carbon emissions in half and move toward a permanently lower greenhouse gas future will require a revolution in technology, the report finds. Such a revolution, it says, must be built on some combination of electricity, biofuels and hydrogen. All of those strategies present significant hurdles, including infrastructure requirements, costs and — especially in the case of biofuels — the need to assure the use of truly sustainable feedstocks.

“Yet through a combination of RD&D, careful and co-ordinated planning, deployment, and learning by doing, the ambitious long-term targets described in this report can be achieved,” Tanaka writes.

Bringing about this technology transition will require both a steep change in policy implementation by governments and unprecedented investment in new technologies, including the support for infrastructure such as electricity recharging systems. Countries will need to work together, and with a range of stakeholders, to ensure everyone moves in the same direction. With the vast majority of growth in travel, energy use and CO2 occurring in non-OECD countries, those countries will need to be part of the solution, the report says.