Cut out the energy middlemen: Is it time to forget biofuels? 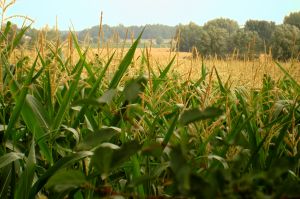 How much more have we yet to learn about the downsides of growing fuel? Could it ever reach the point where we decide it’s time to dump the idea and focus on the energy source that makes all biofuels possible in the first place: the sun?

Cut out the middlemen and focus on solar!

Really, we’re half-serious about this. After all, another study published just this week shows that, after many years of research, biofuels are still not everything they’re cracked up to be. This time, it was research from the University of Virginia that found our current methods for producing algae-based fuel actually carries higher energy, water and carbon footprints than those for growing switchgrass, canola or even corn-based ethanol. And that’s a real problem, considering corn has proven to be such a dud in the biofuel department.

With all the biofuels we’re exploring today, we’re basically just trying to harness the sun’s power anyway, right? Only we’re using middlemen that, while they might be more efficient at turning sunshine into energy than, say, photovoltaics, they come with an assortment of other problems: water consumption, competition with farming for food, reliance on fossil-fuel-based fertilisers and pesticides and high energy inputs.

Yet, we do have to acknowledge there are two key needs that biofuels promise to address that solar energy can’t, at least right now.

One is the intermittency issue: sunlight is available only half the day at most. Liquid biofuels, on the other hand, can be stored away and tapped whenever needed. Point taken.

The other is transport-related. For now, we rely almost entirely on fossil fuels to power our cars and fly our planes. We’re working to make the transition to electric cars (and, yes, even electric airplanes) but a full-scale revolution in how we get around will take many years to complete. That’s an issue considering the fossil fuels we use are pumping ever more greenhouse gases into the atmosphere, not to mention that they’re also getting progressively more difficult and more expensive to extract.

The solution to both these concerns could lie with better, lighter batteries. Find a way to store the sun’s energy for use at night and make those batteries work in cars and planes, and biofuels start looking increasingly unnecessary.

While there’s a lot of exciting discoveries and innovations in the area of battery research, we’re not there yet, though. Until then, it seems, biofuels research must also soldier on.

Which one do you think we’ll achieve first: easy, efficient and low-impact biofuels or light, powerful and long-lasting batteries? Let us know in the comments section below.