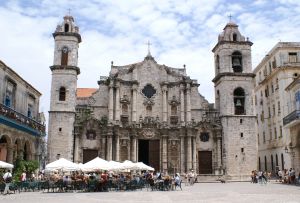 Of all the intriguing findings in the just-released 2010 Environmental Performance Index, one in particular leaps out: Cuba’s ranking as the world’s 9th best performer overall — far ahead of countries like the UK (14th), Germany (17th), Spain (25th) and the US (61st).

In fact, Cuba’s air quality matches or exceeds that of number one Iceland (less industry and fewer cars likely contributing to that), and its management of forestry and fisheries also rank near the top.

And here’s the question that raises: Is Cuba more environmentally sound because it had no choice to become more sustainable after it lost its lifeline when the Soviet Union collapsed in 1991?

After the USSR fell, Cuba entered what’s now called the Special Period, when it was forced to deal with the loss of large amounts of both oil and cash from its former Soviet ally. Food security became a huge problem, too, with the population’s average calorie intake dropping dramatically.

In effect, Cuba’s choice was to sink or swim.

As Wikipedia notes in its entry on a 2006 documentary about that time period — “The Power of Community: How Cuba Survived Peak Oil” — “Cuba began a slow recovery focused not on finding new energy sources, but on rejecting consumption in favor of sustainable growth.”

One of the steps it took was to convert its hydroponic farming systems — no longer usable without imported fertilisers from the USSR — into “organopónicos,” large containers filled with composted waste and watered using drip irrigation. Such urban gardens now produce large amounts of food in cities like Havana.

All of which leads to another question: if the globe doesn’t shift quickly enough to a more efficient, clean-energy and sustainable future, at what point might we all face a similar sink-or-swim moment? And will we be able, at a global scale, to respond as effectively as Cuba did?