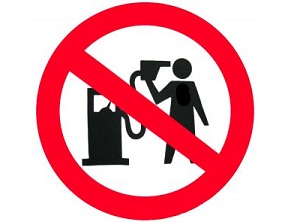 How dependent are we on a steady supply of fossil fuels? In particular, how much does a fully functioning society depend on the gasoline flowing from gas pumps?

People in the UK are getting a rude reminder right now as the simple suggestion of a strike by fuel truck drivers has set off panic buying at gas stations across the country.

Despite the fact there currently is no strike, people are lining up many cars deep at gas stations, with the result being that some stations actually are now running out of fuel.

The situation began escalating Monday, after tanker drivers represented by Unite voted in favor of a strike action after what they say is a year of failed efforts to reach an agreement with employers in the oil industry. Calling the decision “unacceptable and selfish,” government officials then added fuel to the fire with suggestions that motorists “top up” their tanks and store extra fuel in cans in their garages (advice since rescinded, given the inherent dangers of fuel storage).

The result? Panic-buying across the country … despite no strike actually being scheduled, the requirement for seven days’ notice if a strike were to be scheduled and talks still ongoing.

The last time Britain saw something similar was in 2000, when farmers and truck drivers protesting rising fuel duties blockaded fuel depots across the country, leading to similar panic-buying and supply shortages.

That incident led to the famous declaration that the UK was “nine meals from anarchy,” the title of a 2008 lecture given by Andrew Simms of nef (the new economics foundation).

Quoting a public safety report from the Canadian government, Simms stated, “The impact of the protest was much deeper than anticipated because it struck at a particularly vulnerable point of the UK economy — the oil distribution network, which had been organized along just-in-time delivery principles.”

The Q&A provided by Unite includes the question, “How long would it be before the pumps run dry?”

“Unite hopes they don’t — we want to talk to the employers about a fair, negotiated solution.

“But if they refuse to do so, petrol stocks could run dry within 48 hours of a strike beginning.

“The oil supply chain, from the extraction of crude oil, to delivery to the forecourt (service station), must run perfectly. Delivery to the retailer is the final link before it is sold on to drivers.

“When fuel distribution to forecourts is stopped, it has to be stored in the refineries. But within 3-4 days of strike action, the refineries will reach their capacity to store fuel, which could force oil rigs to stop drilling.”

Supplies of goods on store shelves would also start dwindling quickly, as the UK’s Industry Task Force on Peak Oil & Energy Security noted in its 2010 report:

“Manufacturing and retail businesses widely depend on just-in-time business models, and transport is fundamental to this approach … This means that the prices of most goods on the retail shelves have a significant transport component in their buildup, and availability on the shelves is acutely vulnerable to oil supply shortages. Thus, a hike in oil prices will quickly find its way through to the shelves, and into people’s weekly shopping bills. A shortage of oil will likewise be quickly felt as a shortage of goods in the shops … “