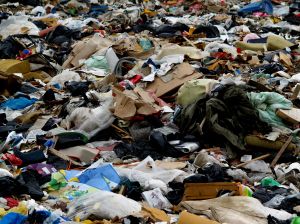 Household recycling – and anything to do with bin collections – is a subject guaranteed to get Daily Mail readers frothing at the mouth but the latest government figures claim 90 per cent of councils are now meeting or exceeding recycling targets.

The headline stats for last year, revealed by Environment minister Jane Kennedy are:

“Recycling is now part of everyday life in this country and the way we think about waste has changed. The Government remains committed to supporting local authorities in continuing this revolution in recycling.”

A big pat on the back goes to East Lindsey District Council, which had the highest household recycling/composting rate (58.4 per cent, in case you were wondering).

Nationally, the household recycling and composting rate has jumped from 30.9 per cent in 2006/7 to 34.5 per cent last year.

But is the picture really as rosy as it seems? A report in today’s Daily Telegraph says councils and collection companies are being overwhelmed by recycling mountains because of thousands of tonnes of newspapers, bottles and cans they are unable to sell.

It’s another effect of the global financial meltdown, apparently, which has sent commodity prices for recyclable material plummeting.