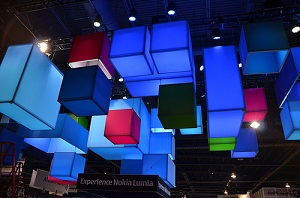 It’s that time of year again, when the Sugar Plum Fairies have put away their dancing shoes, and the season’s stage — in Las Vegas, anyway — becomes home to a whirling mass of technotopian dervishes.

Yes, the International Consumer Electronics Show (CES) is back again.

Never mind US unemployment, the price of oil and weekly expectations of financial doom from the EU — the CES is always good for a temporary escape to Consumer Electronics Wonderland. This year’s show is also, organizers say, larger than ever, with more than 3,100 exhibitors occupying a space larger than 37 football fields.

As usual, there’s tech hype and hope galore, with some of the innovations unveiled on the first day including smartphones; smart, 3D and other cutting-edge-style TVs; solar-charging devices; digital health-related products; and various smart-home technologies. And, because so many of those devices are used on the go and suck up lots of power, Duracell’s lifted the curtain on its new line of Duracell Powermat battery-charging and portable wireless backup power products.

The Duracell Powermat pitch? “A world where phones never die.”

Due to hit the market in the second quarter of 2012, the new power products are part of the Procter & Gamble-Powermat joint venture’s plans for a “Wireless Power Nation.” The plan includes bringing accessible, networked power to New York’s Madison Square Garden and releasing a Duracell Powermat app to let people know when their smartphones are running low on power and where they can find the nearest networked location for a wireless recharge.