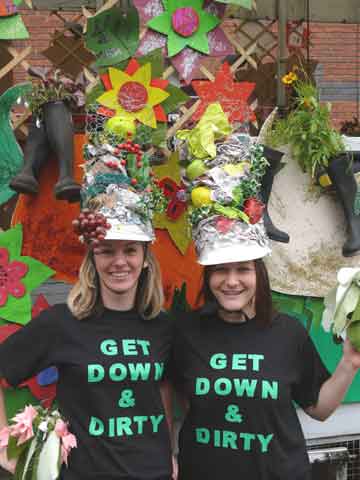 These cheeky monkeys were having fun promoting composting for Manchester Council last month.

A home composting-themed float, festooned with giant worms and huge pieces of fruit and vegetables, was among the attractions at Manchester Pride – the annual lesbian, gay, bisexual and transgender festival which took place in August.

Created by Manchester City Council’s Waste and Recycling team and local partners, the float was built on to the base of a recycling collection vehicle, where staff, dressed in flamboyant “composting” hats, containing decorative fruit, vegetables, foliage, newspaper and cardboard, used compost bins as drums to entertain the crowds.

“Home composting and recycling is something that everyone can do and this is a message that we want to communicate to all sectors of the community.

“Manchester Pride gave us an ideal opportunity to reach out to hundreds of people including Manchester’s lesbian, gay, bisexual and transgender residents, to promote home composting in a fun and accessible way.”