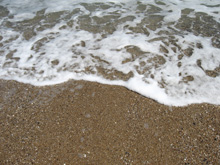 Oh yes, it’s not all about decking boughs and donning gay apparel, some folk are using the tail end of December to strike some interesting deals, not least with the news that Finavera Renewables has concluded an agreement with a utility company, Pacific Gas and Electric, to supply electricity generated from wave power.

Finavera’s grid feeding will start in 2012 and if all goes well, Finavera will up its energy creation from 2 megawatts to 100 megawatts. That’s some uppage.

News.com had a chat with company’s head guy, who gave this little nugget:

“With PG&E behind us, we will be able to go to a bank, if we can show there is no technology risk, to get financing,” said Jason Bak, Finavera’s CEO.