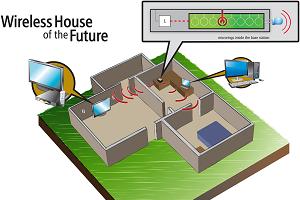 In the not-too-distant future, all the communications devices in your home and car could go completely wireless, thanks to an innovative technology being developed by researchers in the US.

The “chip-based spectral shaper” under development at Purdue University converts ultrafast laser pulses into bursts of finely-tuned radio signals that can enable secure computer connections, high-definition television broadcasts and other communications without the need for any wires.

The technology eliminates one of the problems associated with today’s continuous-wave radio-frequency transmissions, which often encounter interference from signals reflecting back off of walls and other objects. However, the new device reduces such interference by generating radio signals with laser pulses lasting just one-tenth of a trillionth of a second.

“What enables this technology is that our devices generate ultrabroad bandwidth radio frequencies needed to transmit the high data rates required for high resolution displays,” said Andrew Weiner, a professor of electrical and computer engineering at Purdue.

The new device also overcomes the difficulty that conventional computer chips have with transmitting high-frequency signals, thanks to “timing jitter” caused by the uneven timing at which transistors open and close. The jitter problem doesn’t affect current wireless computer communications because ordinary computer chips operate at a relatively slow speed of around 3 gigahertz. It does, however, affect devices that operate at 60 gigahertz, which falls within the 57 to 64 gigahertz band that doesn’t require licensing by the US Federal Communications Commission. (Other frequencies are reserved for military communications.)

That means a 60-gigahertz system for wireless communications could enable devices that are compatible worldwide.

“There is only a very limited window for civil operations, and 60 gigahertz falls within this window,” said Minghao Qi, an assistant professor of electrical and computer engineering.

Purdue’s chip-based spectral shaper converts ultrafast laser pulses into just that frequency using tiny “microring resonators” of silicon that filter out some frequencies and allow others to pass. The microring filter can be tuned by heating the rings, which causes them to change so they filter different frequencies.

Qi said the technology is about five years away from being ready for commercialisation.

“Of course, ideas about specific uses of our technology are futuristic and speculative, but we envision a single base station and everything else would be wireless,” he said. “This base station would be sort of a computer by itself, perhaps a card inserted into one of the expansion slots in a central computer. The central computer would take charge of all the information processing, a single point of contact that interacts with the external world in receiving and sending information.”

Qi added, “(I)nitially, industry will commercialise devices that only receive signals, for ‘one-way’ traffic, such as television sets, projectors, monitors and printers. This is because the sending unit for transmitting data is currently still a little bulky. Later, if the sending unit can be integrated into the devices, we could enjoy full two-way traffic, enabling the wireless operation of things like hard-disc drives and computers.”