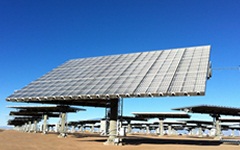 With the opening of the Alamosa Solar generating facility, Colorado is now home to the world’s largest concentrating photovoltaic electric power plant in the world.

Located in the San Luis Valley, the 30-megawatt plant was developed by Cogentrix Energy.

Covering 225 acres, the project features more than 500 pedestal-mounted trackers, each one with 7,560 Fresnel lenses that focus sunlight onto arrays of solar cells. The lenses boost the power of the sunlight hitting the photovoltaics by a factor of 500.

According to the CPV Consortium, “CPV, with its higher efficiency delivers higher energy production per megawatt installed, provides the lowest cost of solar energy in high solar regions of the world. The technology is in its early stage with significant headroom for future innovation, and it has the ability to ramp to gigawatts of production very rapidly. Many of the limitations for PV in the past are overcome by advances in CPV technology.”