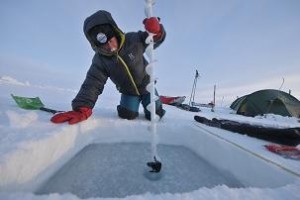 Scientists working at a remote ice base in the Arctic have begun experiments to see how microscopic crustaceans, vital to the marine food chain, might respond in a future ocean environment that’s absorbed increasing levels of atmospheric carbon dioxide.

The studies are being carried out as part of the 2010 Catlin Arctic Survey, an international collaboration that aims to understand how greenhouse gases are changing the chemistry of the seawater, leading to a phenomenon known as ocean acidification.

“Within only a few decades, an increase in ocean acidity may cause seawater to become corrosive to the carbonate shells of the smaller marine creatures that are so abundant in our marine ecosystems, with potentially serious consequences for both them and the larger marine fish and mammals that rely on them for food,” said Ceri Lewis, an ice base scientist from the University of Exeter. “Here at the ice base we’re running a series of experiments with copepods collected during special plankton trawls of the Arctic Ocean. We’re seeing how they’ll respond to pH levels expected in 100 and 300 years, according to predictions provided by the IPCC. You might say we’re sending them into the future!”

Copepods are of great ecological importance. One of the most numerous multi-cellular organisms in the water column, they’re believed to contribute the biggest source of protein in our oceans and serve either directly, or indirectly, as food for most commercially important fish species. They also play a vital role in carbon transfer from surface waters down to the deeper ocean waters.

Because carbon dioxide is more easily absorbed in cold water, the Arctic Ocean is likely to feel the effects of rising greenhouse gases sooner than other seas.

“It’s early days for research into acidification in this part of the world, but our findings could act as an early warning system for changes across the globe,” said Helen Findlay, an ice base scientists from Plymouth Marine Laboratory.

The scientists have created small experimental aquaria in which the collected copepods have been placed and then maintained in a hole in the ice to keep them at seawater temperature. The acidity of the seawater has then been increased to the predicted levels using hydrochloric acid and sodium bicarbonate, a method approved by EPOCA, a leading scientific consortium investigating ocean acidification. The effects of this change in acidity on the health of the copepods will then be measured both out at the ice base and then back in the laboratories in Exeter.

“The consensus amongst scientists is that the oceans are acidifying at an unprecedented rate,” said Pen Hadow, the survey director. “Investigating how these tiny organisms may respond in the coming years is vital to our understanding of how wider marine communities may be affected. It’s just one strand of a survey that sees explorers and scientists working together to further understand a changing Arctic environment.”