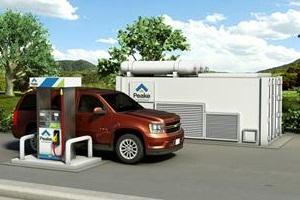 With US production booming and low prices, natural gas could be an appealing fuel for a growing number of motorists.

However, finding ways to fill up aren’t always easy for individuals and fleet operators that already have vehicles that run on natural gas. GE and Peake Fuel Solutions, an affiliate of Chesapeake Energy Corp., hope to offer a solution through what they’re calling their CNG in a Box system (CNG meaning “compressed natural gas”).

The “plug-and-play” system is designed to let fleet operators and retailers deploy a natural gas fueling quickly and simply, according to GE.

Unveiled at the 2012 annual show of the National Association of Convenience Stores (NACS), CNG in a Box will roll out this fall, when more than 250 systems are expected to be deployed in the US. GE is also offering a financing plan for the system through GE Capitol.

According to a report on natural gas supplies from the International Energy Agency (IEA), the US had some 74 trillion cubic meters of recoverable natural gas resources at the end of 2011. That’s enough to provide 110 years of production at current rates. About half of those resources are unconventional supplies such as coalbed methane, tight gas and shale gas.

“Two of the largest shale plays that have been identified, the Marcellus and Haynesville formations, taken as single reservoirs are among the largest known gas fields of any type in the world,” the IEA noted in a special 2012 report, “Golden Rules for a Golden Age of Gas.”