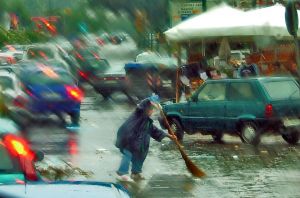 This is pretty sobering…

The impact of climate change and urban development could more than triple the number of people around the world exposed to coastal flooding by 2070, a report claims.

The Organisation for Economic Co-operation and Development (OECD) says 150 million people could be exposed to a 1 in 100-year coastal flood event by 2070. That figure is 40 million today.

The estimated financial impact of such an event would also rise to $35 trillion by 2070,
up from $400 billion today.

Speaking in advance of his visit to the UN Climate Change conference in Bali, OECD Secretary-General Angel Gurría emphasised the need for countries to act now to address the economic challenge of climate change.

“Climate change is already happening, and concerted action is needed now to prevent its worst impacts” he said. To tackle it, “a range of economic policy options is available and political commitment is needed to implement them.”

The study analyses the exposure of people and property and infrastructure to a 1-in-100 year flood event in over 130 key port cities worldwide. A 1-in-100 year flood event is a commonly accepted risk assessment standard. The study aims to help policy makers determine where to focus adaptation strategies to climate extremes and to understand the potential benefits of mitigation policy. It is the first in a series of OECD reports looking at the economic impact of climate change on cities.

In its estimate of the impact of climate change, the study assumes mean sea level rise of 0.5 meters by 2070. This estimate includes the contributions from melting ice sheets that have proved important over recent decades and is consistent with a medium to high risk scenario.

Mitigation strategies will slow and limit the exacerbating effects of climate change on coastal flood risk, the report notes. This will bring precious time for cities to implement adaptation measures. Studies show that putting effective coastal defences in place can take 30 years or more. Adaptation will have to move to the top of the policy agenda today if it is to make a difference tomorrow.

Around half of the total population exposure to coastal flooding caused by storm surge and damage from high winds is contained in just ten cities today.

Mumbai has the highest number of people exposed to coastal flooding. But by 2070, Kolkata (Calcutta) will be the most vulnerable, with the exposed population expected to increase over seven times to more than 14 million people.

Over the coming decades, the unprecedented growth and development of the Asian mega-cities will be a key factor in driving the increase in coastal lood risk globally. In terms of population exposure, Kolkata is closely followed by Mumbai, Dhaka, Guangzhou, Ho Chi Minh City, Shanghai, Bangkok and Rangoon (Myanmar). Miami is in ninth place and would be the only top ten city in a currently developed country, while Hai Phong in Vietnam is ranked tenth.

The cities with the highest value of property and infrastructure assets exposed to coastal flooding today are primarily in developed countries.