carbon dioxide23
In one of the odder discoveries related to climate change, researchers with the US Department of Agriculture (USDA) have found that rising carbon dioxide... 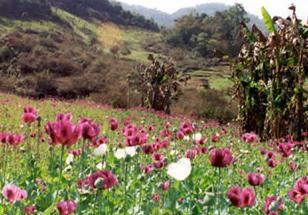 In one of the odder discoveries related to climate change, researchers with the US Department of Agriculture (USDA) have found that rising carbon dioxide levels are causing opium poppies to become more potent.

Scienceline, New York University’s environmental reporting programme, says researchers have found that poppies grown today produce twice as many alkaloids — chemical compounds such as morphine (which can be used to make heroin) — as they did in 1950. Based on those growth levels, scientists expect the morphine levels in poppies could triple by 2050 and increase by 4.5 times by 2090.

As carbon dioxide levels keep rising, we can’t expect plants across the board to become more packed with certain chemical compounds, though. Lewis Ziska, a researcher with the USDA’s Crop Systems and Global Change Laboratory who conducted the poppy study, found in previous tests that tobacco plants produce less nicotine as carbon concentrations increase.

Such findings suggest a warming world will also be a more chaotic one for plants, which raises a host of possible problems for people as well. Wheat, for example, might produce more grains, Ziska said, while poppies and other plants such as poison ivy could become more potent.

Still other researchers have found similar plant chaos, with some plants growing taller and leggier — but less nutritious– in higher concentrations of carbon dioxide.

So are we looking at a future with more undernourished, but more overmedicated, people? Guess we’ll have to wait and see.