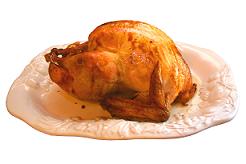 Greenbang finally has something to humbug about this Christmas time. Aside from, obviously, the absolute consumerist nature of the whole affair, the inexcusable amount of wasted card and paper that will inevitably end up residing in a landfill somewhere and the fact that another space has to be found to store the never-to-be-used toys, gadgets and novelty items that Greenbang will be given on this sacred day.

According to the Press Association, the carbon footprint of Christmas dinner is the equivalent to that of 6,000 car journeys around the world.

Academics at The University of Manchester estimate that producing a dinner for eight people generates 20kg of carbon dioxide emissions.

Researchers have assumed one third of the UK population eat this typical Christmas meal, meaning the nation generates the equivalent of 51,000 tonnes of carbon dioxide emissions.

What kind of car are we using on this journey?  What’s the average fuel consumption?
The only people more Scrooge-like than Greenbang, then, are the people who decided to research into this.