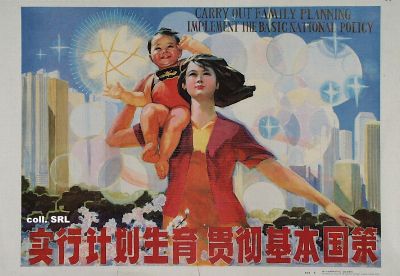 CHINA WATCH China’s controversial one-child-policy seems ridiculous and inhumane to some people due to its extreme methods (eg, forced abortions and other human rights abuses), but it’s also believed to be good for the economy–and climate change, according to Beijing.

“Birth planning” was first introduced in 1979 when families were encouraged to have only one child to control the population (the picture above is of an old poster, the kind that used to be pasted all over cities a decade ago, but can’t be found today).

China says the policy has helped the fight against global warming by avoiding 300 million births–the same as the whole population of the US, as Reuters reports. All this means less demands for energy and less pollution, China reckons.

China, which rejects criticism that it is doing too little to confront climate change, says that its population is now 1.3 billion against 1.6 billion if it had not imposed tough birth control measures in the late 1970s.

“This is only an illustration of the actions we have taken,” said Su Wei, a senior Foreign Ministry official heading China’s delegation to the 158-nation talks from Aug 27-31.

He told Reuters that Beijing was not arguing that its policy was a model for others to follow in a global drive to avert ever more chaotic weather patterns, droughts, floods, erosion and rising ocean levels.

But avoiding 300 million births “means we averted 1.3 billion tonnes of carbon dioxide in 2005” based on average world per capital emissions of 4.2 tonnes, he said.