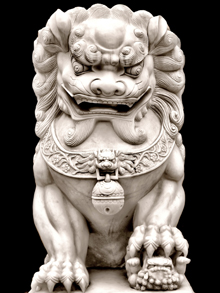 More environmental plaudits for China. If Greenbang knew what a plaudit looked like, that would be a plus. Answers on postcard for that one.

But back to the plaudits. Fresh from its bag-banning glory, the country has decided to unify all those energy policy makers under one big green government umbrella, according to Reuters.

China will likely get an energy ministry in March and upgrade its environment watchdog to ministry status, sources said on Monday, as it aims to boost fuel security with oil at $100 a barrel and cut back on pollution.

If the massive shift in China’s unwieldy bureaucracy goes ahead, it would mark a sea-change in government priorities that will be welcomed by disparate groups ranging from oil industry executives to environmental campaigners.

And – AND – there’s more. There’s more. Billions-in-anti-pollution-investment-style more, according to Xinhua.

The Chinese government has decided to invest largely in developing technologies to treat water pollution, according to the State Environmental Protection Administration (SEPA) [….] The programs, to last between 2008 and 2020, will support researches of technologies to remedy pollution of rivers, lakes, drinking water and those to monitor the water body environment.