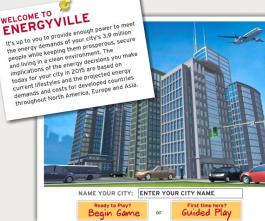 For those who missed it, Chevron’s new online game, aimed at highlighting the challenges involved with powering a city in the future, is playable here.

It’s not exactly Halo 3, but then it’s got a rather different aim. You run your city in stages, choosing its energy mix for the next decade or so, and then fastforward to the next level to see what’s happened. It’s all based on real data, supplied by the Economist Group.

From an information point of view, there’s plenty to learn, along with a message that becomes pretty obvious pretty quickly, as one reviewer puts it:

There are also catches. Try using nothing but renewable energy, and an alert in stern capital letters will warn you that your city “needs petroleum.” You’ll get the same result if you rely solely on coal.