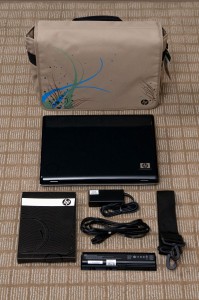 Greenbang’s not always the biggest lover of supermarkets, usually opting for the local food market rather than the Sainsbury’s at the end of the road.

Whilst I respect their purchasing power there are, I feel, very few occasions when the industry as a whole uses it well. But, on this occasion, Greenbang is impressed.

Walmart, which owns Asda in the UK and is the world’s biggest retailer, challenged its biggest electronics manufacturers to cut down on packaging in a ‘Home Entertainment Design Challenge’ competition last year.

The company’s top 30 suppliers of mp3 players, TVs, consoles and, well, lots more leccy goods to boot were challenged to slim down their packaging and distribution footprint.

And some of the suppliers, including the likes of Lexmarrk, Phillips and Sanyo appear to have responded brilliantly. But Walmart declared HP the winner of the competition.

HP stripped 97 per cent of the packaging for its new $800 Pavilion laptop, which will be shipped in a fabric bag (pictured) instead of a large box with masses of polystyrene. Which has thrown down a rather large gauntlet to those suppliers dragging their feet.

There’s also another benefit too. Because there is no longer a box to ship, HP can also ship 25 per cent more per lorry / container ship.

“This effort is an extension of our ongoing commitment to provide our shoppers with the best eco-friendly product offerings. We received many strong ideas from different suppliers, but the innovative packaging with this HP laptop really stood out.”