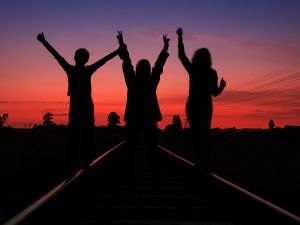 So here’s something for Wednesday evening – Friends of the Earth giving their bit on carbon offsetting.

In brief, they say it should be a last resort.

It’s certainly a tricky one, Greenbang thinks, because there’s currently no limit how much you can offset. So you’ve unlimited offsetting rights.

If that changes, it might be of more use, but until then it needs a bit of work.

But anyway – here’s what the FOE crew says:

“Carbon offsetting schemes are being used as a smokescreen to avoid real measures to tackle climate change. We urgently need to cut our emissions, but offsetting schemes encourage individuals, businesses and governments to avoid action and carry on polluting. There is still time to act, but we cannot afford to be distracted by measures that at best only have a small role to play in providing the solutions to global warming.”

“Carbon offsetting should be a measure of last resort, after steps have been taken to cut emissions. The Government has a role to play in ensuring that offsetting schemes are genuine. But its main role must be to ensure that UK emissions are cut. This is why its proposed new climate change law must commit the UK to making annual cuts in it’s carbon dioxide emissions.”

What is it and how does it work?

The principle behind carbon offsetting is that the carbon emissions generated through an activity (such as driving or flying) are calculated and someone is then paid for an initiative that reduces carbon dioxide in the atmosphere by an equivalent amount.

Initiatives that can generate carbon offsets include energy efficiency projects (e.g. installing energy saving technologies in housing developments), renewable energy schemes (e.g. wind farms) or tree-planting schemes which can take carbon dioxide out of the atmosphere. Often these schemes are in developing countries.

What does Friends of the Earth think about carbon offsetting?

Friends of the Earth, does not recommend carbon offsetting for a number of reasons.

Carbon offsetting is being promoted as a relatively pain-free way of tackling climate change. A growing number of schemes now exist which claim that carbon-conscious individuals and businesses can compensate for the carbon emissions released by their activities by donating to various `green’ projects from tree planting to renewable energy schemes in the developing world.

Friends of the Earth, along with a number of other organisations, is becoming increasingly concerned that carbon offsetting is being used as a smoke-screen to ward off legislation and delay the urgent action needed to cut emissions and develop alternative low-carbon solutions. Offsets can even encourage businesses and people to continue with (or even increase) unnecessary polluting activities, promoting the mindset `I’ve offset so it’s OK to fly’, `I’ve offset so it’s alright to drive to work’ etc.

But buying offsets is not, as some would like us to believe, a `magic bullet’ to prevent further climate change or a solution to the growth in emissions.

Friends of the Earth’s concerns include the following:

We no longer have the luxury of living energy wasteful lifestyles in wealthy countries while using our money to reduce emissions overseas. This is the clear conclusion from scientists, who are urging dramatic reductions in greenhouse gases if we are to avoid the worst impacts of climate change. The rich world needs to reduce its emissions substantially and fast (in the UK by as much as 70% by 2030) help developing countries develop clean low carbon technologies (and cope with the unavoidable impacts of climate change). It is no longer one or the other – we need to do both.

Offsetting infers a way to carry on with the polluting activity because you can buy your way out of the problem. We need to urgently shift towards a low carbon economy. Ultimately there is no solution to climate change other than to emit less pollution. The longer we delay action on actually cutting emissions, the worse the problem gets and the harder it will be to cut them later on (so for example, in the UK, if we offset CO2 from flights but continue to promote growth in aviation infrastructure, it will be harder to cut emissions later on when the runways have been built).

Individuals and organisations that are considering cutting emissions may be encouraged not to bother – because they can offset instead.

There are strong concerns over the environmental credibility of many of the credits and the contribution of the projects to sustainable development. Money for an offset scheme should only be funnelled to projects that would not have happened unless the offset money was provided.

Other potential problems such as uncertainties over the carbon accounting; lack of verification of the schemes and a danger that projects can be imposed on developing country communities with no consultation.

Tree-planting schemes are particularly problematic and should be ruled out of any offset scheme. Large scale plantations have decreased biodiversity, displaced people and caused social disruption. Doubts have recently been cast on the contribution of trees outside the tropics in reducing CO2 levels and the science is uncertain.

Friends of the Earth believes that we should campaign for measures that cut emissions such as rules and regulations and incentives to make it cheaper and easier for everyone to do the right thing by the climate.

Government can influence behaviour at both the individual and corporate level by sending clear signals about what we need to do. That’s why we’re campaigning through The Big Ask climate campaign for the UK Government to introduce a strong climate change law which commits the UK to making annual reductions in the UK’s carbon emissions across all sections of society (homes, transport, business, industry etc), creating the framework necessary to allow the solutions to climate change to flourish, i.e. clean energy, well designed cars, a 21st century public transport system, help for people to make their homes thermally efficient, technological and financial assistance to developing countries. A strong law would allow the UK to do its fair share of cutting global emissions and would set an example the rest of the world could follow.

For companies to invest in new carbon-saving products they need to be confident that the Government is determined to move towards a low-carbon economy. The greater certainty that would arise from setting annual targets for CO2 cuts would help achieve this. This would encourage businesses and individuals to reduce emissions at source as much as is practically possible by looking at energy conservation and efficiency measures (e.g. using greener fuels, energy provider etc). The problem with carbon offsetting is that it makes it harder to persuade people to actually reduce their emissions at source. We need to fly less, buy less, regulate polluters and support communities affected by pollution and climate change.

What does Friends of the Earth recommend?

The priority must be for governments, businesses and individuals to do all they practically can to cut down or avoid carbon emissions (before considering the purchase of offsets). In addition

If you believe, like Friends of the Earth does, that governments have the major role in fighting climate change then you can take action with us (or support us financially)

You can support practical projects which help the poorer country communities get access to safe, clean renewable energy and adapt to the impacts of climate change that are now unavoidable. (In most cases this will not compensate for your emissions as it is simply providing renewable energy to those people who had no access to energy before). If you want to help with these kinds of projects you can support well known charities, such as Practical Action or Christian Aid, or you can contact one of the responsible carbon offset companies and ask to fund a Gold Standard project (a standard which ensures the project is genuine and really delivers useful benefits).

Friends of the Earth recommends you only consider buying offsets as a last resort (after comprehensive measures to avoid and cut emissions across activities). Because there is a small role to play for offsetting schemes, these need to be properly regulated.