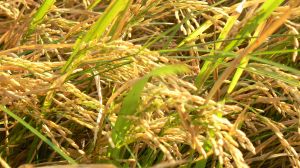 How can India keep building its economy and infrastructure while cutting its carbon footprint? A team of international researchers believes one answer could lie with using waste materials like rice husks to replace some of the cement that’s being consumed by the fast-developing nation.

Portland cement, a key ingredient for making concrete, is produced by an energy-intensive process that heats limestone with clay at high temperatures. High energy typically means high carbon, and that’s true for cement: for every tonne of cement produced, we also get about one tonne of carbon dioxide. In fact, cement currently accounts for about five per cent of the world’s annual carbon dioxide emissions.

If less carbon-intensive waste materials could reduce the amount of cement needed in concrete, India’s ongoing economic expansion could proceed with a lighter carbon footprint. At least, that’s what the UK-India Education & Research Initiative (UKIERI) project aims to achieve.

The project brings together researchers from Britain’s Universities of Bath and Dundee with collaborators in India in an effort to develop more environmentally-friendly cement. Together, the team is looking at ways to reduce cement’s carbon footprint by using readily available waste materials.

“There’s no single perfect replacement for Portland cement — instead we are looking into a number of ‘green’ cements that use different waste materials depending on what is locally available,” said Kevin Paine from the University of Bath’s department of architecture and civil engineering. “For example, in India you might burn rice husks to make silica to mix with the cement; in the UK you might use fly ash made from burning coal.”

Paine said, “India’s infrastructure is developing rapidly and it is the second largest producer of cement in the world, after China. Therefore this collaboration with Indian research institutes is developing the new technologies in the countries where it’s most needed.”

“The scale of the problem facing infrastructure development in India and the UK means that collaboration between a number of institutions is the only way to reach our goals,” added Moray Newlands, who’s with the Concrete Technology Unit at the University of Dundee. “We have to look at the environmental challenges collectively to make a meaningful impact.”

Paine, Newlands and Ravinder Dhir — also from Dundee’s Concrete Technology Unit — recently returned from a UKIERI meeting in Punjab, India, where they presented their latest research and shared ideas with colleagues for developing new types of cement with lower carbon footprints.

“Concrete is the second most used material in the world after water, and so reducing the CO2 emissions produced by it could make a real difference to climate change,” Paine said.