Carbon capture as much use a chocolate teapot: Greenpeace 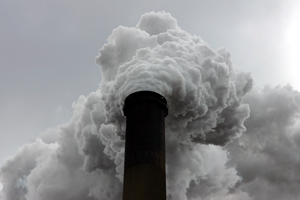 Pass the tissues. Greenbang has a nasty feeling she’s going to break some big polluters’ hearts. OK guys – brace yourselves, Greenbang is just going to say it: Greenpeace isn’t impressed with your eco-efforts. There, it’s out in the open now.
Specifically, Greenpeace is not impressed with the technique now being examined by a few big businesses, Exxon Mobil among them: carbon capture and storage (or CCS), which whips the carbon out of emissions, so it doesn’t go into the air. Instead, it’s put away underground for safe keeping.
According to the latest Greenpeace report, CCS is about as much use as a chocolate teapot. Here’s a snippet from it:

CCS cannot deliver in time to avoid dangerous climate change. The earliest possibility for deployment of CCS at utility scale is not expected before 2030. To avoid the worst impacts of climate change, global greenhouse gas emissions have to start falling after 2015, just seven years away.

CCS wastes energy. The technology uses between 10 and 40% of the energy produced by a power station.2
Wide scale adoption of CCS is expected to erase the efficiency gains of the last 50 years, and increase
resource consumption by one third.3

CCS is expensive. It could lead to a doubling of plant costs, and an electricity price increase of 21-91%. Money spent on CCS will divert investments away from sustainable solutions to climate change.

CCS carries significant liability risks. It poses a threat to health, ecosystems and the climate. It is unclear how severe these risks will be.

Want more? This is the PDF you’re looking for.