Carbon capture and CO2 as fuel – the plot thickens… 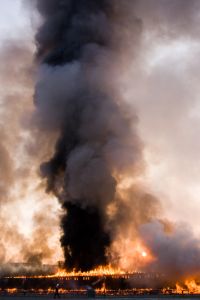 Okay – so Mr Ian Houston’s company, Origo Industries, has caused quite stir with the Greenbang audience. Web traffic (by Greenbang standards) went nuts the other day when we published the story about capturing carbon emissions and using algae to turn it back into fuel – a closed-loop system.

The one thing we couldn’t do was verify the claims.

But the company that tested the carbon-capture device on Mr Houston’s 2.5 litre shogun (a 4×4 Chelsea tractor by his own admission), has been in touch.

The Airmax Group sent us this report of the what it’s up to with Origo. You can download it here: amxrccv1.pdf

It’s not all science – or maybe as in depth as we’d like (maybe that’s good because we’re not scientists but hacks and bloggers who like fat lunches), but here’s a sample:

“Early indication is that the system could be adapted to be used easily on stationary combustion  engines like generators. However if zero CO2 is not the game but a lowering of emissions to below 120g/km and compliance with Euro4 to obtain 100% relief of the London Congestion charge mechanism or the new Low Emission Zone then that’s another matter.

Even then having emissions below the threshold without a modern Euro4 engine may offer up an issue with Transport for London (TfL) on registration. Ironically some 4×4’s are large enough to install the equipment within so maybe the tide is about to turn for some. Unfortunately such new
innovations do not yet appear on the list of technologies on the TfL Powershift Register or approved installer list by the Energy Saving Trust.”