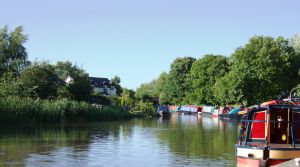 Canals used to be vital to the manufacturing industry at the height of Britain’s industrial age, with barges transporting goods all over the country. That age is long gone with many of the country’s canals declining into state of disrepair, clogged up by bikes and shopping trolleys dumped in the water.

But British Waterways, the body responsible for the UK’s canals, wants to use the network to install wind turbines and small-scale hydro power schemes to generate enough annual electricity to power 45,000 homes and save more than 100,000 tonnes of CO2.

The proposals are based on a target of 50 wind turbines built across the UK over the next five years that will have the capacity to generate 100MW of renewable electricity. Income that British Waterways generates from the turbines will then be reinvested into maintaining the UK’s waterways.

“We believe that our waterside land could host around 100MW of renewable energy capacity – some 219,000 mega watt hours. If we successfully develop this resource it would mean that the nation’s canal network would generate more than ten times more electricity than it consumes.”

British Waterways is working with Partnerships for Renewables who, with the backing of HSBC’s Environmental Infrastructure Fund, will be covering the costs of the development process and using their in-house expertise to ensure that only environmentally appropriate sites are developed.