Can wind farms have a butterfly effect on weather? 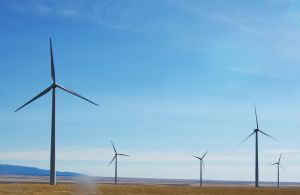 Wind power has come in for a bit of a shoe-ing this week, what with a House of Lords report saying wind is unreliable and risky and should be ditched for nuclear, and now researchers in the US claim giant wind farms could have a major impact on the weather.

According to a report on the Discovery Channel, researchers at the University of Maryland used computer modelling to work out what the impact on the weather would be if all the land from Texas to central Canada and from the Great Lakes to the Rocky Mountains were covered in one huge wind farm. Now Greenbang is no scientist, but that’s one hell of an assumption to throw into a computer simulation experiment.

Nevertheless, the results found a wind farm the size of most of the US would lower windspeeds by up to 6.7mph downwind and disrupt air currents.

The researchers admitted their hypothetical wind farm was, well, unlikely ever to be built but said wind farms on the scale needed to meet US goals on wind power generation by 2030 could cause enough weather disturbance to steer storms – which might actually be a useful thing.

“This is the butterfly effect, right? It’s just that we have a really big butterfly.”