Can white roofs really save the planet? 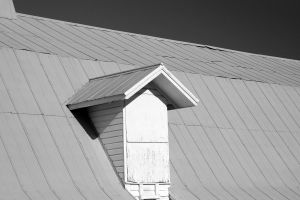 The idea of painting roofs white to reflect the sun’s rays and help cool houses naturally without energy-intensive air conditioning isn’t exactly new and has been floating around for a while. There seem to be some solid scientific arguments behind it but some people just think it’s a bit crazy.

Now a new study claims to show that painting roofs white can help combat global warming. It claims that if the world’s 100 biggest cities installed white roofs and changed to ‘cool’ pavements with more reflective materials such as concrete it would be enough to offset 44GT (giga tonnes) of carbon dioxide emissions.

The rather complicated calculations in Berkeley National Laboratory physicist Hashem Akbari’s research, which lost us after about slide number five, say an ‘average’ 1,000 square foot roof offets 10 tonnes of CO2 if replaced with white material. In a gigantic leap Akbari then extrapolates that out, working out that roofs globally account for about a quarter of the surface of cities and pavements 35 per cent.

Work out the switch in 100 big cities to white roofs and cool pavements and you get your 44GT of offset CO2 – which would offset the growth in CO2 emissions for the next 11 years.

Have a look through the study yourself here and let us know if you think this is a planet saving idea or just plain bonkers.