Can Joule deliver on the hype? Clock’s ticking for ‘fuel from the sun’ 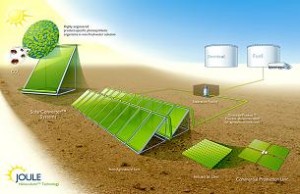 For the company Joule Unlimited, which claims it’s developed a way to create “Liquid Fuel from the Sun™,” today marks a watershed moment. Not because it’s nabbed $30 million in funding and adopted a new, more corporate name (it was previously “Joule Biotechnologies”).

No, today’s a big day because this is the point where the Cambridge, Massachusetts-based company has to start proving that it can deliver a reality that matches its hype.

And what a bit of hype it’s promising. Joule’s technology sounds pretty much what some would call the “Holy Grail” of clean energy (we won’t, because we’re so sick and tired of that phrase … we’re just saying): a strategy that requires no clean water and no arable land and uses a “library” of “highly engineered, product-specific photosynthetic organisms” to essentially pluck the energy straight out of sunlight and convert it directly into liquid fuels ready to go in today’s cars, trucks and planes.

If that’s not a spectacularly exciting concept for an energy- and food-hungry, carbon-glutted world, we don’t know what is.

But here, as they say, is where the rubber meets the road. Joule has plans to take its pilot operations to commercial scale by 2012 — that’s a pretty short time frame. And in that time frame, it promises to be able to produce “up to 15,000 gallons of diesel per acre annually, at costs as low as $30 per barrel equivalent.”