Can cities ever be sustainable? 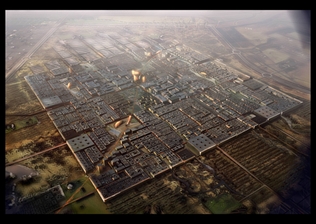 This is the question Greenbang is grappling with today. And he’s feeling pretty sceptical, truth be told. Of course, no such thing exists today, it’s just an idea. But a bunch of engineering and architecture firms reckon it’s possible.

At a basic level, the whole notion is just nonsense. You just can’t build a whole city without making a pretty big impact somehow–and you can’t house, feed, water and maintain a city-sized community without taking a drain on natural resources to some extent. But the sustainable city debate is centred on whether you can create something that is self-sufficient in energy terms, as well as food, water, reuse of waste, and so on.

Again, all of this exists only in planning documents, such as the much-hyped Dongtan scheme in China (which remains practically unknown in China itself, according to our local Greenbanger) or the Masdar development in Abu Dhabi pictured above (thanks to Building for the image).

Still, it’s a worthy goal to aim for. And in February, a bunch of clever folks with gather in Australia to talk about how to make the plans a reality–at EcoEDGE 2. We’ll be watching with interest.