nanotechnology9
Ultra-tiny structures that mimic the structure of butterfly wings could hold the secret to more powerful solar cells, according to researchers from the State... 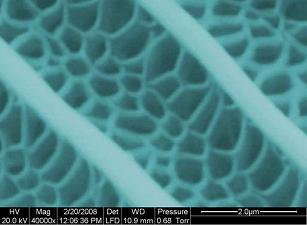 Ultra-tiny structures that mimic the structure of butterfly wings could hold the secret to more powerful solar cells, according to researchers from the State University of Pennsylvania and the Universidad Autónoma de Madrid.

The researchers have developed a technique that recreates biological structures on a nano scale (one nanometre is equal to 0.000000001 metre). In nature, nano-sized structures give many insects their iridescent appearance, in which their colours appear metallic or seem to change depending on the viewing angle.

The US and Spanish scientists have found a way to mimic such biostructures to develop devices with light-emitting properties.

In order to create new biomaterial, the team used compounds based on germanium, selenium and stibium (GeSeSb) and used a technique that combines thermal evaporation and substrate rotation in a low-pressure chamber. They also used an acid solution to dissolve chitin, which is a substance typically found in the exoskeleton of insects and other arthropods.

The new technique overcomes the problems associated with past nano-scale biomimicry methods, as it is employed at room temperature and does not require the use of toxic substances.

Man-made nano-structures that mimic butterfly wings could be used to make various optically active structures, such as optical diffusers or coverings that maximise solar cell light absorption, or other types of devices, according to Raúl J. Martín-Palma, a co-author of the study.

“Furthermore, the technique can be used to replicate other biological structures, such as beetle shells or the compound eyes of flies, bees and wasps,” Martín-Palma said.

Replicating the compound eyes of certain insects could also lead to a large number of applications, as they provide great angular vision.

“The development of miniature cameras and optical sensors based on these organs would make it possible for them to be installed in small spaces in cars, mobile telephones and displays, apart from having uses in areas such as medicine and security,” Martín-Palma said.