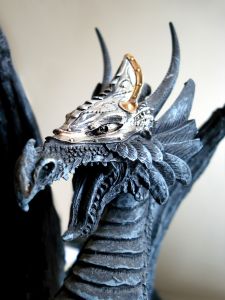 Forget Dragon’s Den – Greenbang just attended the “Green Dragon’s Lair”, a night of environmental pitching for business funds, with an esteemed 🙂 panel of green experts listening to a variety of start-up green entrepreneurs, who presented a host of innovative ideas about everything from car fuel systems to food production.

Around 60 people were at the event, hosted in the plush surrounds of Lewis Media, in central London, organised by the sustainable technology group.

Greenbang’s Dan Ilett, was on the panel.

The winning idea – voted for by the audience – won a month’s PR from Lewis Green, the environmental public relations arm of Lewis Media.

As with many of these events, it represented the chance to see and hear from people who are at the cutting edge of green tech, presenting their ideas succinctly….and what became apparent is that while there are some truly excellent ideas, some need a bit more work.

Proceedings kicked off with Rudi Schogger, of OneWorldEnergy, who is behind a ‘onestop’ energy shop online – aggregating environmental solutions and utilities for the consumer. Schogger’s web site will be a chance for consumers to learn more about environmental living and products, and offer them the chance to buy insulation, and micropower solutions, for example, and switch energy providers to ensure a ‘greener’ service. The site is set to go live in January 2008, followed by the roll out of High Street stores across the UK.

Nicko Williams of Climate Cars gave the most succinct of presentations, but then his business idea is already up and running. Climate Cars provides hybrid chauffeur-driven vehicles, allowing business users – where the majority of business currently comes from – to take advantage of transport services with less green guilt. He currently runs a fleet of 11 vehicles, and is keen to expand rapidly.

Noel Hodson presented FoodTubes, an idea that caused a ripple of noise in the auditorium. His company proposes a network of tubes, or pipes, around the UK, which will deliver food in pneumatic-driven capsules, direct from the manufacturers to the store. This will, according to Hodson, save some GBP 4 billion in fuel costs and GBP 13 billion in traffic congestion. Despite these enormous environmental benefits, Hodson is looking for GBP 2 million in research and development funding, and the tube loop – which would go around the UK – will cost some GBP 60 billion to install.

Robin Dickinson represented the Global Institute of Emissions Accounting, a body with the aim of standardizing CO2 emission standards, rather like the ISO system. His argument was that without any standard method of accounting for the amount of emissions, we cannot compare levels internationally, or take effective steps to counteract the effects. He also highlighted the recent Government report which underlined the need for emission reduction by 2015. Dickinson was looking for sponsorship in order to highlight the need for emissions accounting.

Peter Anderson’s Voice web site represents grass roots democracy – a chance for local people to raise issues in their community via the site, and then get them heard at local or county council level. This social entrepreneurial project was warmly received, but it was noted that the business model would have to rely on advertising. Anderson is looking for GBP 40,000 to launch, and GBP 250,000 to roll the project out globally.

Matt Davis and Steve Bignell came along to discuss PC power management, with a piece of software provided through their company, United Access Limited. They claim that their technology – licensed from a successful US company – will bring enormous cost savings and reduce wasteful energy usage greatly.

Nick Booth of Mobbed Online bought the strangest business idea to the party. He suggested the High Street internet terminals placed all over the UK are not being used, but that they could be used to take pictures of people recycling their rubbish. The panel could not work out how he planned to make money with this idea, but he suggested that it was more a way of recouping the money local and regional councils had spent on installing the terminals, as this was at least a way of generating interest in their usage.

Prof Stef Simons and Dr Paula Carey brought a demonstration of their product, Carbon8 Systems, a method of turning waste materials and contaminated soils into re-usable product, (for the building industry) therefore reducing the huge problems associated with landfill. The cutting edge, yet apparently simple, technology, will enable new buildings to be made using the manufactured material and give them a highly desirable ‘carbon neutral’ rating.

Peter Campbell, of Drinking Water Solutions, told the panel his company provided fixed water purifying machinery, but both the panel and the audience seemed unimpressed by the lack of innovation his company showed. Undoubtedly a great product, however, Campbell explained how he is working very closely with local councils and schools in London, and business is set to boom.

Simon Daniels gave an energetic presentation regarding his company, USBCELL Batteries – household batteries which can be recharged via the USB socket of a computer. These batteries are already available in the market.

David Brunnen, from Mountains out of Microbes, explained how, having observed the way sludge is created in a dying Australian lake, this chemical reaction can be brought to a household level as a way of extracting carbon dioxide from waste. He is looking at ways to develop ‘bioreactors’ which would be small enough for everyone to install in their back gardens. He also plans to release the technology under an ‘open source’ scheme, whereby industry and universities compete to create the product.

And the winner? Carbon8. The audience obviously warmed to the live demonstration of mad science in action, and could clearly see the benefits of the technology in making a long term, sustainable difference.

The two hour meet-up was designed to give more than a dozen new companies – some in business, some incubating – the chance to talk through their ideas to the panel, who then questioned them on the machinations of their business.

The Sustainable Technology Group hosts meetings on the last Monday of every month, and membership is free to interested parties .