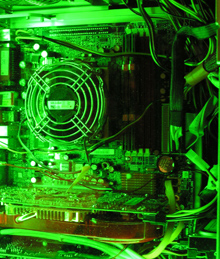 After getting a bit bah humbug about the CES’ attempts at green gadgets, Greenbang was slightly cheered up to read a story over at Information Week about the Greener Gadgets conference, where the great and the good and the green showed off all their big green ideas. Here are a couple:

Nokia (NYSE: NOK) showed off its 3110 Evolve, which is made partly of post-consumer materials and is 80% recyclable. The mobile phone company also showed off a prototype ecosensor, which looks like a watch, can be worn on the wrist, and works with a cell phone to give information about the atmosphere and weather, as well as readings on vital signs. The device works with a phone and is charged by solar rays.[…]
MiniWiz Sustainable Energy Development’s HYmini is green, geeky, and sporty. It’s marketed as “your personal green badge” and glows green when charging. The handheld universal charger draws power from solar rays, wind, and regular wall outlets to recharge 5-volt gadgets, including iPods, mobile phones, PDAs, and cameras. The fan-like gadget, which captures wind power, can be fastened around the arms of joggers or the handlebars of bicyclists for maximum potential.

Only slightly cheered mind you – a frustratingly large amount of these cool green gadgets are still just concepts. Are the R&D boys having a go-slow or something?