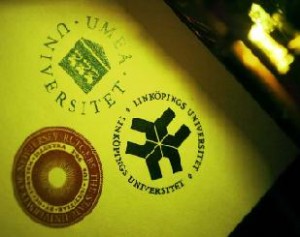 Swedish and US researchers have developed a new lighting technology that could lead to innovations like illuminated wallpaper made entirely of plastic and cheaper, more easily recycled electronic devices.

While today’s OLED technology has enabled a proliferation of ultra-thin, energy-efficient gadgets, it comes with a couple of drawbacks. One, OLEDs are made with indium tin oxide, and indium is rare, expensive and difficult to recycle. Two, the OLEDs themselves are costly to make.

Replacing OLEDs with LECs could solve both those problems, as the LECs feature a transparent electrode made with graphene — a one-atom-thick lattice of carbon, which is far cheaper and far more abundant than indium.

“This is a major step forward in the development of organic lighting components, from both a technological and an environmental perspective,” said Nathaniel Robinson, a scientist at Sweden’s Linköping University. “Organic electronics components promise to become extremely common in exciting new applications in the future, but this can create major recycling problems. By using graphene instead of conventional metal electrodes, components of the future will be much easier to recycle and thereby environmentally attractive.”

Today’s OLEDs feature a light-generating layer of plastic between two electrodes, one of which has to be transparent. With the LECs, the transparent electrode is made of graphene. Furthermore, all the components of LECs can be produced from liquid solutions, making it possible to essentially print LECs on a roll.

“This paves the way for inexpensive production of entirely plastic-based lighting and display components in the form of large flexible sheets,” said Ludvig Edman, a researcher at Umeå University. “This kind of illumination or display can be rolled up or can be applied as wallpaper or on ceilings.”