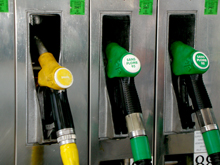 You would have thought anything Richard Branson (that’s Sir Richard Branson to you) wants, he gets. If he wants hot and cold running models, riding dodos, wearing platinum ingots and flanked by unicorns, he’d just have to root around behind his sofa and magic up the necessary funds. But no, there are some things that Richard needs some help from the government to supply. Like hydrogen fuelling stations.

According to the venerable Channel 4 Sir Branson has been asking Gordon Brown and fellow premiers to get on with getting the hydrogen highway underway.

The paper quotes Branson as saying:

“We are calling upon governments world wide, not just the UK and the US, to assist our businesses by building hydrogen filling stations in key cities so that drivers can fill up their cars more easily.
“As a first step, existing filling stations could add renewable energy pumps alongside other fuel pumps.”

The news comes as Branson’s Virgin Atlantic said it will begin shifting VIP passengers around in hydrogen fuel cars.