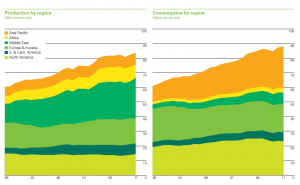 What’s the most telling comment in this year’s BP Statistical Review of World Energy? It’s this statement from chief executive Bob Dudley’s introduction to the report:

“The world is not structurally short of hydrocarbon resources — as our data on proved reserves confirms year after year — but long lead times and various forms of access constraints in some regions continue to create challenges for the ability of supply to meet demand growth at reasonable prices.”

In other words, the world still has lots of fossil fuels, but it’s becoming increasingly harder to open the spigot further as a growing global population uses ever more energy.

These are the factors driving that reality:

Put all of those factors together, and it’s clear that “reasonable prices” for oil will be ever harder to attain.