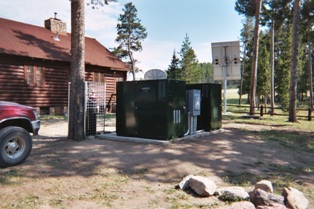 Non-hydrogen fuel cell makers are picking up attention from investors as their prospects start to look cheerier than their hydrogen-based siblings.

Non-hydrogen approaches, which are powered by natural gas or other fuels like ethanol tend to focus on power generation, rather than aiming to power tomorrow’s green cars–a daunting prospect.

The key problem facing the hydrogen fuel cell companies was the prohibitive cost of the infrastructure to deliver the hydrogen. Shares of companies in that market segment went through a dot-com-style boom and bust.

“We are some time away from any significant revenue traction in the sector,” said Henwood of Camino Energy.

“The non-hydrogen crowd is a different story; they don’t have the technology challenges and are making progress, and once they get their products solidified they can get revenue traction.”

As firms developing hydrogen-based cells have suffered lately, non-hyrodogen ones are thriving.

“The shift from hydrogen to non-hydrogen fuel cells has been the trend in recent years. Now, the investment community has seen that and are voting with their dollars,” Gary Simon, chief executive of Acumentrics Corp., told Reuters.

“Non-hydrogen has solved some of the problems, and there’s a consensus from customers that they would prefer non-hydrogen fuel cells,” said Simon, whose Westwood, Massachusetts-based company develops 5,000-watt solid oxide fuel cells [pictured above].