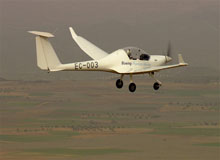 Greenbang has a low fun threshold. She almost choked on her beans and toast this morning due to a state of dangerous excitement caused by the discovery that Boeing has flown a hydrogen fuel cell powered plane.

According to the venerable Boeing, it’s the first time “in aviation history” anyone’s tried this sort of thing.

It’s not using a hippopotamus-sized jumbo for the trial yet alas: rather, it’s a dainty snip of a thing (pictured up there) called a Dimona two seat motor glider, with a 16 metre wingspan.

Here’s the skinny according to Boeing:

During the flights, the pilot of the experimental airplane climbed to an altitude of 1,000 meters (3,300 feet) above sea level using a combination of battery power and power generated by hydrogen fuel cells. Then, after reaching the cruise altitude and disconnecting the batteries, the pilot flew straight and level at a cruising speed of 100 kilometers per hour (62 miles per hour) for approximately 20 minutes on power solely generated by the fuel cells.

According to Boeing researchers, PEM fuel cell technology potentially could power small manned and unmanned air vehicles. Over the longer term, solid oxide fuel cells could be applied to secondary power-generating systems, such as auxiliary power units for large commercial airplanes. Boeing does not envision that fuel cells will ever provide primary power for large passenger airplanes, but the company will continue to investigate their potential, as well as other sustainable alternative fuel and energy sources that improve environmental performance.

BR&TE, part of the Boeing Phantom Works advanced R&D unit, has worked closely with Boeing Commercial Airplanes and a network of partners since 2003 to design, assemble and fly the experimental craft.

And if you want to know more, there’s a video here. Greenbang advises not watching whilst eating beans on toast.