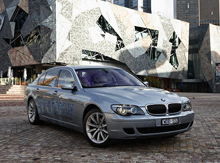 Watching the electric cars vs hydrogen cars debate feels like watching a very long game of chess to Greenbang – one where both sides are looking dangerously tasty.

BMW’s head of clean-energy technology, Jochen Schmalholz, reckons it’s going to be a very, very loooooooooong game of chess, telling Australia’s Fairfax that it could be 15 to 20 years before hydrogen cars are on the roads in significant numbers.

Time for a cup of tea and a shortbread finger while we wait then.

Schmalholz agrees with comments made by the chief executive of General Motors, Rick Wagoner, at the Detroit motor show last week that electric cars will be a reality in the next five to 10 years. He says BMW is also working on an electric car but a decision on production is yet to be made.

“We will only bring this [electric car] if it makes sense,” he says. “At the moment we are not really convinced it will work for BMW. But if it makes commercial sense and it makes sense to our customers, then we will do it.”