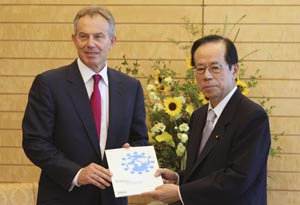 Former British PM, Tony Blair and The Climate Group have published a report entitled “Breaking The Climate Deadlock – A Global deal for our low carbon future.”  The report, available here, steps away from merely highlighting the problem and gives for the first time, or so the writers claim, a clear action plan outlining the 10 building blocks for an agreement that will create a prosperous low carbon climate-resilient world.

In Tokyo, this morning, Tony Blair gave a speech to launch the report targeted towards G8 + 5 leaders, policy makers, business leaders, and opinion formers from key countries.  In it, the former PM highlighted that the solution must “include America and China…put the world on a path away from carbon dependence to a new and green economy…[and] be realistic”

The strategy is split into two phases, the latter of which will be given at the next G8 in 2009.  Phase 1, clarify and order the agenda for the solution.  Phase 2, set out what the solution might be.

As quoted in Tony Blair’s full speech, the 10 building blocks are identifying:

“The report warns of the danger of a yawning chasm between, on the one hand the calls for radical action from scientists, environmental groups and people rightly alarmed at the effect of greenhouse gas emissions on the planet; and on the other, the anxiety of decision makers in politics and business, who share the aims of the radical action but worry about whether that action is realistic.  Long-term everyone accepts that the needs of economy and environment are in partnership.  Short-term there is a clear tension.  And we live in the short-term.”
…”The US emissions are still growing.  So are those in Japan. In Europe they are static. China and India are set, rightly, to industrialise and move their vast hundreds of millions of poor people from subsistence agriculture to the modern economy.”

“We are talking of a global 2050 target of at least a 50% cut in emissions.  But let’s be clear.  This date is decades away and decades beyond the political life of any government. The key challenge is to describe a realistic pathway to it. That implies shorter term goals.  But these are immensely demanding, asking developed economies to move from growth in emissions to significant cuts within 10-15 years.”

“What this report proposes, is an approach to the Copenhagen agreement at the end of 2009 that does not attempt a deal that tries to resolve all issues up to 2050 or even 2030 or 2020. But instead begins a process that will then undergo revision and adjustment as our knowledge improves and the facts become clearer.”So we propose:

“1.  Set a clear direction in Copenhagen and get the action under way.  Do not try to put a spurious precision on each and every aspect.  Set a realistic target and get the change started.  Make Copenhagen the beginning but not the end of a process that will require constant adjustment over the years.

“2.  Carry on through to next year’s G8 the informal process whereby G8 and the developing world major economies continue to try to resolve core questions.  Together G8+5 and MEM represent three quarters of the global emissions.  A steer from them is an essential precondition to a deal.  This doesn’t supplant the UN process.  It supports it.

“3.  There are a plethora of really tricky questions that need answering before a serious negotiation can work.  We detail these in the report.  It is surely wise to commission work and research on them, making full use of the enormous range of non-governmental bodies, institutes and experts, many of whom contribute to the UN’s work.

Tony Blair also discussed the need to agree a work plan through to next year, to get this work done. Specifically asking:

“How do we raise the money? Is there a place for auctioning credits? If so, how would it work? Is the CDM the right mechanism? Can it be reformed? How do carbon markets link up? Should the developing world have access to them? How do we transfer technology? Do we need a new IPR regime?”

And some of the specific steps:

“Energy efficiency would provide around one quarter of the gains necessary and, incidentally, save money. It requires special focus.  The vast majority of new power stations in China and India will be coal-fired; not “may be coal-fired”; will be. So developing carbon capture and storage technology is not optional, it is literally of the essence.”

“Without at least some countries engaging in a substantial renaissance of nuclear power, it is hard to see how any global deal could work.”

“Deforestation amounts to around 15-20 percent of the entire emissions problem.  Certain key sectors like cement, steel and of course power most of all, account for a huge percentage – almost half of all emissions. Airline and shipping emissions, though only 5 percent today, are a fast growing part of the problem.

“Done right, the costs of abatement will be manageable and probably less than predicted; and there are potentially real opportunities for the new low-carbon economy that will develop.

“In the end this is the question:

“What is it reasonable to ask countries to do on their own?

“What more could be done, if the right partnership was in place for a global deal?

“i.e. How do we, by use of global mechanisms, accelerate the process of change in individual countries?

“There may be a gap between what it is reasonable to do; and what is necessary for the climate to survive.

“The global deal is about eliminating that gap.”