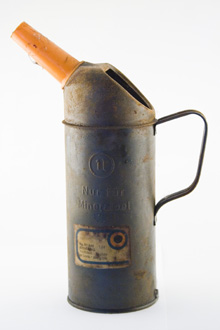 Biofuels: a bit like Santa, always giving for free and being nice, or a bit like Satan, doing bad stuff? No, it’s not a Trivial Pursuit question, but a question that’s pondered by all of those wondering where to lay their green tech bet.

The House of Commons Environmental Audit Committee has made up its collective mind, and opted more for the beard, tail and trident option.

It’s put out a report on the whole issue and here’s a summary of it’s findings.

2. The Government and EU’s neglect of biomass and other more effective policies to reduce emissions in favour of biofuels is misguided. The current policy and support framework must be changed to ensure that sustainable bioenergy resources maximise their potential to generate energy for the lowest possible greenhouse gas emissions. In general biofuels produced from conventional crops should no longer receive support from the Government. Instead the Government should concentrate on the development of more efficient biofuel technologies that might have a sustainable role in the future.

3. The EU Environment Commissioner, Stavros Dimas, recently admitted that the Commission did not foresee all the problems that EU biofuels policy would cause. He indicated that certification would be used to address the negative impacts of biofuels. This is not good enough. The Government should seek to ensure that EU policy changes to reflect the concerns raised in this report. This means implementing a moratorium on current targets until technology improves, robust mechanisms to prevent damaging land use change are developed, and international sustainability standards are agreed. Only then might biofuels have a role to play. In the meantime, other more effective ways of cutting emissions from road transport should be pursued. It will take considerable courage for the Government and EU to admit that the current policy arrangements for biofuels are inappropriate. The policy realignments that are required will be a test of the Government’s commitment to moving the UK towards a sustainable low carbon economy/

If a slice of the report is not enough and you want to gorge on report-pie, you can do so here.