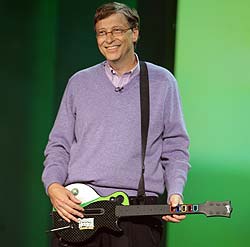 The world’s richest software geek, Microsoft chairman Bill Gates, is one of the investors behind the latest round of funding for algae biofuel company Sapphire Energy.

Sapphire says the money takes it a step closer to bringing the algae biofuel production to commercial scale and plans to use the funds to scale up its production facilities accordingly. The company says it anticipates relying on existing investors to achieve its initial commercial production capability of 10,000 barrels per day.

The company is aiming to produce “Green Crude” on a commercial scale within three to five years.
For those wondering exactly how this stuff works, Sapphire uses sunlight, CO2, industrial micro-organisms, non-arable land and non-drinkable water to produce its Green Crude petrol alternative, which can be refined into chemically identical fuel products compatible with the existing energy infrastructure.

“We created Sapphire Energy by working backwards and considering what a perfect fuel would look like – carbon neutral, renewable, not dependent on arable land or potable water. We are creating an entirely new category of energy – Green Crude Production – and are now at a point where we can focus on implementing our plans without worrying about fundraising.”