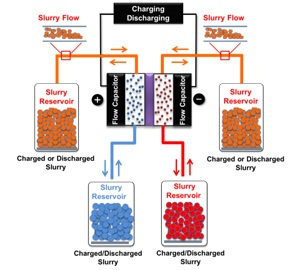 “Liquid batteries” could provide the answer to the large-scale energy storage challenges of a smarter, cleaner electricity grid.

A grid-scale switch to cleaner power such as wind or solar would require some form of energy storage to ensure the lights stay on even when the sun isn’t shining or the wind isn’t blowing. However, using standard battery technology isn’t a realistic option, as it’s difficult — and expensive — to scale.

“Packing together thousands of conventional small devices to build a system for large-scale stationary energy storage is too expensive,” said Yury Gogotsi, director of the A.J. Drexel Nanotechnology Institute and lead researcher on a liquid battery project at Drexel University’s College of Engineering. “A liquid storage system, the capacity of which is limited only by the tank size, can be cost-effective and scalable.”

The “electrochemical flow capacitor” (EFC) would use an electrochemical cell connected to two external electrolyte reservoirs — a design similar to the redox flow batteries used in electrical cars. The system would rely on small carbon particles suspended in an electrolyte liquid to create a slurry of particles able to carry an electric charge.

Uncharged slurry would be pumped through a flow cell, where stored energy could be transferred to the carbon particles. The charged slurry could then be stored in reservoir tanks until the energy is needed, upon which the process would be reversed to discharge electricity.

The system would offer two key advantages over other energy storage technologies: it could be built on a grid-size scale, and it could allow for rapid discharging of electricity when needed.

“Slow response rate is a common problem for most energy storage systems,” said E.C. Kumbur, director of Drexel’s Electrochemical Energy Systems Laboratory. “Incorporating the rapid charging and discharging ability of supercapacitors into this architecture is a major step toward effectively storing energy from fluctuating renewable sources and being able to quickly deliver the energy, as it is needed.”