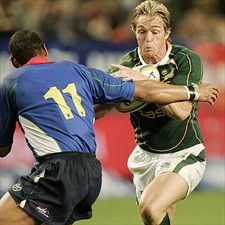 And we’re not talking about the pitches, either. France, hosts of the 2007 Rugby World Cup, says it’s doing everything it can to make the games as green as possible–from solar panels in stadiums to recycled water for the pitches.

These events certainly have an impact, so we hope these efforts help, especially since Greenbang will be on hand to watch South Africa take on England in Paris (ooh, what a game it’s gonna be).

This from Reuters, via the Environmental News Network.

The matches are expected to generate around 778 tons of stadium trash and soak up some 4.7 million kWh of electricity, the equivalent of leaving 73,000 60-watt light bulbs burning throughout the whole six-week tournament.

Part of that will be balanced by installations such as the 2,600 square meters of solar panels on the roof of the stadium in Saint Etienne or a smaller solar power facility near the Australian team’s training ground in Montpellier.

1 thought on “Big green for the Rugby World Cup”