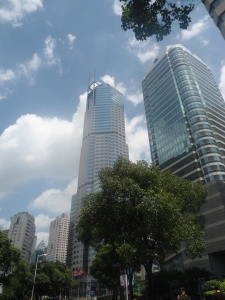 The ventilation standards most building engineers follow were developed decades ago … long before up was the only way remaining to build in our cities.

That means skyscrapers are not only vertically stretching office buildings, but sources of unplanned-for air pollution to their downwind neighbors.

With the aid of new building guidelines, though, our cities could be made more environmentally friendly, according to researchers at Concordia University.

Their studies of models tested in Concordia’s wind tunnel laboratory showed that air pollution in cities can be controlled by optimizing the height and spacing between buildings as new structures go up.

“We came up with three main guidelines for the placement of stack and intake in order to minimize the amount of air pollution that makes its way into downwind buildings,” said engineering professor Ted Stathopoulos, who conducted the research with recent Concordia graduate Bodhisatta Hajra.

First, intake vents on buildings downwind of a polluting tower need to be placed on an upwind side and closer to its more sheltered wall. Second, air intakes should not be placed on rooftop locations downwind of a pollution-emitting skyscraper. And, finally, increased spacing between buildings can reduce the chances that pollution from one will be re-ingested by another.

“While our research may not reduce the amount of outdoor pollution in our cities,” said Stathopoulos, “it can certainly help ensure that this same dirty air is not re-circulated indoors.”