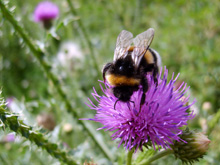 It is a great disappointment to Greenbang that her B at GCSE for science didn’t allow her to impact the scientific landscape. Thankfully, other bees are already making a difference.

Let Greenbang explain: a group of smart cookies at a company called Tekion have worked out how to use the nastiness from ant bites and bee stings in a mini fuel cell that can be used to charge up gadgets like mobile phones. Says Canada.com:

Tekion’s recharger, which contains a miniature fuel cell that runs on formic acid – the same chemical emitted as venom by biting ants and bees – is about the size of a BlackBerry and should retail for under $100.

n fuel cells, formic acid gives more concentrated power than other fuels, allowing it to be integrated into small electronic devices such as the cellphone, which Huff described as the “Holy Grail” of devices to master. As cellphones add more and more functions such as cameras, video and MP3s, they require so much power that batteries are reaching their limits.

This adds to the pantheon of impressive tech used to charge gadgets, including solar and kinetic power, Greenbang presumes soon solar powered,self-recharging mobile bees can’t be far behind.