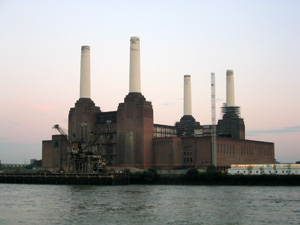 Battersea Power Station: one of London’s most recognisable buildings. Apart from if you’re the person in charge of finding locations for the Macguyver film, Lost Treasure of Atlantis, in which case you probably thought that no one would notice the power station looming over the back of a non-specific East European terrorist camp.

Still, to anyone familiar with the capital’s southpaw bank, the Battersea Power Station is a recognisable old building.

And one that could be about to get a whole lot more recognisable with a green makeover. Should property company Real Estate Opportunities get its way, the old girl will be kicking out some electricity once more (this time of the renewable kind) and get some new green architecture to boot.

Real Estate Opportunties unveiled its Battersea vision late last week, and here’s what it looked like:

A spectacular 300 metre high Chimney and Eco-dome will dramatically reduce carbon emissions of the 38 acre £4 billion development. The Chimney will also house apartments with panoramic views over London. The largest solar driven natural ventilation system ever conceived will eliminate the need for air conditioning for the commercial and ground floor retail accommodation.

The Chimney will draw air up through a campus of high quality individual office buildings which are covered by the light, transparent Eco-dome, made of material similar to that used at the Eden Project. Up to 3,000 cubic metres per second of air will be drawn through the system on a sunny day, reducing energy demand in the buildings by 67%.

REO is planning to spend £150 million on saving and repairing Sir giles gilbert Scott’s 1930s Power Station, with the key historic spaces retained and open to the public. It will be developed to incorporate hotel, residential and retail accommodation. It will once again be used to produce power with a new combined cooling, heat and power plant, but this time using biofuels, waste and other renewable energy sources.

Two of the existing Power Station’s chimneys will be reused as flues for this new Energy Centre.