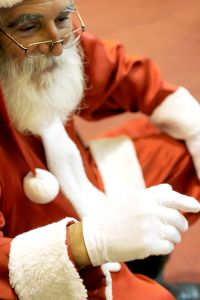 Greenbang is flippin’ tired of Christmas, and it’s still November.

This will make him sound like a grumpy old man, but it’s just not right that you can’t even fit into the shops, let alone find some crap to buy someone as a present.

Over the past few years, Christmas has come to mean less and less to Greenbang. It is of course great to see the family, but he doesn’t need people to buy him stupid presents he will never use again.

And despite trying to make polite protests about this to loved ones, every year it happens.

Last week for his birthday, his friend bought him a remote-controlled dalek (which is about to go Freecycle), while his family bought him new consumer electronics – an iPod to be precise (there are now four in the house…). He asked them not to do this and just get him a bit of running gear and maybe a new karate jacket.

That might sound ungrateful, but Greenbang is a technology journalist. He has drawers full of gadgets and devices companies have sent him in the hope he’ll write something about them.

But there is still too much crap in the shops.

Take wasabi (Japanese mustard) – ten years ago when Greenbang lived in Japan, you couldn’t find wasabi in the supermarket. These days, you can choose your brand of it in Tesco.

Greenbang is a bloke. He’s got all the stuff he needs. And if he needs something else, he gets it. He doesn’t need DVDs (it’s all on YouTube), smellys (he smells of roses), or music (it’s all on iTunes).

In fact, Greenbang is a pretty difficult person to buy for. And he likes it that way.

So for someone who likes a minimalist lifestyle, it’s quite grim going shopping on the high street.

The worst is the supermarket. The queues are depressing, and something feels very wrong with packing a trolley full of crap, half of which is going in the bin a day later.

Perhaps these is a lack of evidence for this argument to pack any weight behind it, but Greenbang simply feels something is wrong.

That could be a lack of advertising about cutting down on wrapping paper and packaging. It could be that few ad campagins for Christmas even mention recycling. It could be that, despite grim reports of how we need to change actions now, Christmas goes on in the same way it always has – only with fiercer momentum to consume faster than ever and encouragement to buy more crap.

Or it could be that he’s just a grumpy sod (coz he’s hungry) and should forget the whole argument and spend the festive season getting drunk with friends as usual.