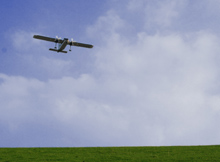 In a sort of aviation ‘we will fight them on the beaches’ declaration, the International Air Transport Association (IATA) has thrown up its hands, harrumph-ed a little bit and said it will most certainly put up its dukes and fight a planned European emissions trading scheme.

The scheme would mean any airline flying in and out of Europe will be forced to take part in a carbon trading scheme from 2011 aimed at cutting emissions. And the IATA doesn’t like it much, saying its members are a bit hard up, the scheme doesn’t really work and it would rather see the whole thing go global anyway.

The Independent tells us:

[Giovanni Bisignani, IATA chief executive], said the EU could play a more constructive role by implementing a “single sky” agreement unifying air traffic control across Europe, which Iata says would slash flight times and CO2 emissions. “We have a European parliament that does not understand that implementing economic measures such as a trading scheme are not the solution. We can take away 12m tonnes of carbon dioxide with a single European sky, but the only discussion is about a trading scheme. It’s ridiculous.”

All the while sticking two fingers up at Europe over carbon, it looks like airlines are trying to encourage their customers to get on the offsetting bandwagon: all Virgin Blue customers are given a gentle nudge on the subject whenever they fly.