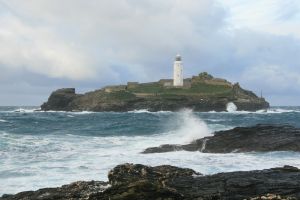 North Sea oil production passed its peak more than a decade ago, but the UK is still looking offshore for future energy supplies … from the ocean waters themselves.

With the potential to generate up to 27 gigawatts of ocean energy by 2050 — that’s as much as is produced by eight coal-fired power plants — the southwestern coastal regions of Britain have been officially dubbed the nation’s first “Marine Energy Park.”

The designation is aimed at bringing together national and local government agencies, local enterprise partnerships, local industries and the Universities of Plymouth and Exeter for a common goal: speeding up the development of marine power in the UK. Among those taking part is Cornwall’s Wave Hub, a grid-connected, offshore research facility for testing wave-energy technologies.

The South West Marine Energy Park will stretch from Bristol through to Cornwall and as far as the Isles of Scilly.

“Marine power has huge potential in the UK not just in contributing to a greener electricity supply and cutting emissions, but in supporting thousands of jobs in a sector worth a possible £15 billion to the economy to 2050,” said Climate Change Minister Greg Barker.

The waters around the UK offer one of the world’s top potential resources for marine energy. One estimate suggests the region’s wave energy alone could realistically supply more than 50 terawatt-hours of electricity per year. That would be on top of the nation’s tidal energy resources, which one study indicated could provide at least 34 percent of the UK’s electricity.