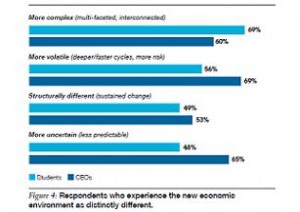 The world’s next-generation workforce — students in university today — have strong opinions about the future of business, sustainability and real-time access to a wealth of information. But many don’t believe the education they’ve received has fully prepared them to deal with the challenges related to those issues.

Students in today’s “Millenial generation” also expect to enter an increasingly complex and resource-constrained work world, yet they remain mostly optimistic and believe that unprecedented access to data will help them make the best possible decisions in their future jobs.

“What these students are saying is that they understand the complexities inherent in a world that is getting smaller and more interconnected all the time, and the implications of those changes for their careers,” said Ragna Bell, associate partner, and strategy and change leader in IBM’s Institute of Business Value. “As a result, they expressed some very different — and powerful — expectations about the responsibilities of business and governments, and by extension, for the paths their careers will take.”

IBM surveyed 3,600-plus university students in more than 40 countries to develop the study, “Inheriting a Complex World: Future Leaders Envision Sharing the Planet.” The research was intended as a followup to an IBM study of CEOs earlier this year, “Capitalising on Complexity.”

Among some of the interesting findings in the new student survey:

The IBM study also notes that, within four years, the Millenial generation will make up half of the global workforce.